The word “raptor” means “predator” from English. It is hard to better describe the F-22, the US’ fifth generation fighter, whose destructive capabilities cannot be compared to any other machine of its kind in the world. Stealth technology, a wide range of weapons, agility, speed and the ability to fight electronically ensure that the US armed forces dominate wherever this aircraft arrives. Below we briefly describe the history, weaponry and most interesting facts about Lockheed F-22 Raptor.

Get real time updates directly on you device, subscribe now.

History of the creation of F-22

The history of the F-22 can begin in the 1970s, when the Cold War arms race was at its best, and both powers – the US and the USSR – were trying to gain a military advantage in every field, including the sky. For the United States, having an air superiority fighter was a priority, and that is why the F-15 Eagle saw the light of day in 1972.

But America quickly got rid of its illusions about the future dominance of its new fighter. Shortly after, their satellites captured the Soviet test centre north of Moscow, where new fighters Mig-29 and Su-27 were being tested, which shocked the US Air Force Command. It seemed that thanks to their agility and speed, the Soviet machines would be able not only to fight on an equal level, but even to have a good chance of winning in a close start against e.g. F-15.

When Ronald Reagan became US President in 1981, the country’s defence budget was increased by $32 billion. Intensive modernisation of the weaponry began, and a new fighter was needed especially urgently to replace the F-15. American experience in Vietnam clearly confirmed the statistics, which said that most of the pilots were shot down there by an enemy that they did not see. The US Air Force command wanted to have an aircraft invisible to enemy radars (read: Soviet Union), which would allow for quick and murderous surprise attacks. This possibility was provided by the stealth technology.

The hull of an aircraft made in this way reflects radio waves into space, and not into radar. In addition, the material of the machine absorbs these waves. Stealth doesn’t make an aircraft invisible – it’s simply less visible.

In 1981 the prototype of the first stealth fighter was flown – it was F-117 from Lockheed. On its basis, the most important requirements for future air superiority fighters were established:

The US Government had launched a competition to create a new fighter. However, it was very demanding for the companies that joined it, because it contained one very rare and serious condition – at the end of the concept phase, the manufacturers were obliged to build two demonstration units each, which were supposed to show what a given aircraft could do. Not all American companies could afford such an investment, so seven projects were submitted for final evaluation.

After 3 months of testing the winner turned out to be YF-22, which although in the most important aspects achieved slightly worse performance than its competitor, but was cheaper, distinguished itself by the supercruise mode and the fact that it was more aggressively launched and even several rockets were fired from it. The new aircraft has been given the F-22 mark and the nickname ‘Raptor’.

The first series production show of the Raptor took place in 1997 and the first one was delivered to the U.S. armed forces in 2003. Initially, the US wanted to order 750 units of a new fighter, but the USSR collapsed and so many of them were no longer needed. In addition, during the first operation of the Desert Storm, the Nighthawk stealth bombers literally swept away Iraq’s anti-aircraft defense, and the Eagle F-15 fighters showed good airborne performance, which further reduced the subsequent F-22 order (the Raptor construction programme was even criticized as unjustified). Ultimately, the United States ordered only 187 units, the last of which was delivered in May 2012 and was manufactured at the end of 2011.

One Raptor cost US taxpayers an average of $360 million, making it the most expensive fighter in history (but the most expensive aircraft in general is the B-2 Spirit Bomber). The parts needed to assemble one model came from six U.S. states, from four companies that supplied the components needed to assemble the F-22. due to the federal ban, the U.S. cannot sell Raptors abroad, although given their cost of maintenance, only a few countries could afford to do so. Only Japan officially expressed its interest in buying F-22, but its offer was not accepted by the Congress. 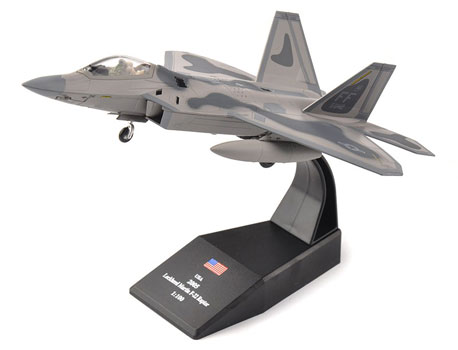 F-22 is, unfortunately, expensive to maintain. An hour of flight costs an American taxpayer as much as $60,000!.

The Raptor is powered by a Pratt & Whitney dual engine that is latent but has an official maximum speed of 1.5 Ma (with an afterburner of 1.8 Ma) without the use of an afterburner. It is unofficially stated that the maximum speed exceeds 2.42 Ma. F-22 can achieve such high speeds thanks to its specially designed geometry, the materials of which it is composed (only 16% of aluminium, as much as 40% is titanium) and the fact that the armour is hidden inside it, which reduces air resistance despite its considerable weight.

The armament is as follows:

F-22 is also unique because of the fact that its capacity is growing from year to year. Like all other planes, its physical features are limited, but inside the Raptor there are computers that control its systems. Replacing computers or software with newer ones makes the American dominator even more powerful, and the further technology goes, the wider the spectrum of possibilities for their pilots to fight in the air will be. The F-22 software already consists of almost 2 million code lines!

Interestingly, the Raptor can be used for an electronic attack because there is a possibility that the opponent’s systems may be overloaded by his radar.

Despite the fact that the F-22 Raptor has the lowest reliability rate among US Air Force fighters in active service, it is still considered to be a fighter out of reach of almost all combat planes in the world. It is believed that the only machines with theoretical chances are the Su-30 fighters with Saturn engines.

Its combat record is modest so far – in the combat conditions F-22 was first checked only in 2014, dropping bombs on the positions of the Islamic State. However, we have a history of training fights between the F-22 and other NATO machines. One of them is a simulation of the fight from 2003, when fifteen F-15, with experienced pilots at their helm, stood in front of one Raptor. After a short fight, Raptor literally crushed the “enemy” planes, none of which even managed to notice him.

On the other hand, there are reports of German Eurofighters pilots who trained together with Americans during Red Flag exercises in Alaska, who supposedly did a good job against the Raporists in training battles. According to them, the key to success was to detect the American aeroplane by infrared, then approach it as close to it as possible, and finally forcing a sudden turn on it, after which for a few seconds it was defenceless. The Germans, however, pointed out that Raptor is unbeatable in the fight over longer distances.

Below is a short video showing the F-22 Raptor in the air:

Get real time updates directly on you device, subscribe now.

Nuclear exercises in Totskoye: how to drop an atomic bomb on your own soldiers

Simo Häyhä “The White Death”, the most lethal sniper in history

“Comrades, we are transporting the whole factory!” Evacuation of the USSR…

Nuclear exercises in Totskoye: how to drop an atomic bomb on your own soldiers

Prev Next
Leave A Reply
Cancel Reply
Stay With Us
Ad